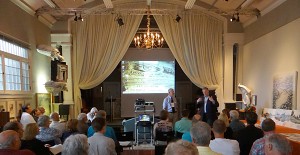 The Eastside TRailway Alliance is a public/private partnership launched to support simultaneous rail, trail and utility development as well as public health on the 44 mile Eastside Rail Corridor from Snohomish to Renton with specific focus on the Upper Eastside Totem Lake to Snohomish segment.

The Eastside TRailway Alliance is a private, non-profit 501c6 community based organization which will serve as an advocacy and outreach organization. The ETA will be able to receive public and private funding to carry out specific studies, community surveys, promotional campaigns, and liaison with federal, state and local agencies and officials. The community based organization will be established in a manner to raise private funding for the project based on the objectives from the working groups.  A separate 5013c foundation will be developed to solicit funds for safety, historical, and agricultural education.

The Eastside TRailway Alliance is co-chaired by Karen Guzak, the Mayor of the City of Snohomish and Les Rubstello, a councilmember for the City of Woodinville.

A formal interlocal compact among jurisdictions having a real property interest or easement in the Snohomish to Totem Lake segment of the corridor will be advised by the Eastside TRailway Alliance organization. The interlocal will be able to receive public and private funding to carry out capital improvements and operating contracts with federal, state, regional and local agencies and officials as well as the King County Eastside Rail Corridor Regional Advisory Committee.   The formal interlocal compact will comprise of public agencies or entities such as the Port of Seattle and Snohomish County.